I did find myself composing another song about Enid Blyton, but sought distraction before it could be perfected. Then, while cycling home from the gym, I passed a petrol station and started involuntarily singing to an old hymn tune:

Top up, top up for Jesus
With ninety-five octane –
It may not be a dollar
Twenty-eight again . . .

Thankfully (you may say) lyrical inspiration gave way to a serious thought. People raised in the Christian tradition are often shocked by the violence that seems to be condoned in the Old Testament and the Koran. “How good it is,” they think to themselves, “that Jesus replaced that jealous, vindictive, racist Yahweh with a loving god, arranged in three neatly-fitting pieces. And what a pity it is that Mohammed conjured up that narrow-minded Allah, obsessed with rigid rules and slaughter.” 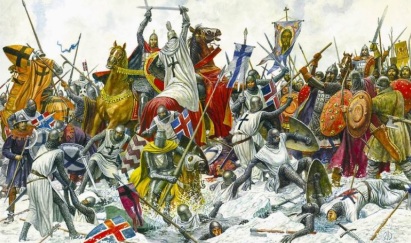 In fact all three of the Abrahamic faiths are pretty nasty if looked at closely. A Jew or a Muslim might listen to “Stand up, stand up for Jesus …” or “Onward Christian soldiers…” and look around in alarm for an approaching horde “with the cross of Jesus going on before!”

And how should Muslims react when a representative of a heavily-armed predominantly Christian nation talks of embarking upon a ‘crusade’?