Communists are devoted to the ideology of Communism. Capitalists snuffle at the trough of Capitalism. Platonists follow the philosophical teachings of Plato.

But what about arsonists, cyclists and saxophonists? They are –ists without –isms. So it is with terrorists. ‘Terrorism’ is not an ideology or a philosophy. Terrorists are simply bad people employing a tactic of war, designed to demoralise an enemy and sap his will to fight. When good people employ this tactic they call it ‘shock and awe’.

So are the Muslims who drive vans at unsuspecting people or set off suicide vests in crowded places terrorists? I don’t think they are, not in the literal sense of the word. They do not seek to create terror, but hatred – hatred of Muslims.

This is not my own original thought. It is the published strategy of Daesh, which recognises three kinds of Muslim. There are the fanatical fundamentalists who support, fund and fight for Daesh’s cause. At the other end of the spectrum are the morally corrupt people who call themselves Muslims but are no better than Infidels: men who drink beer and women who wear makeup, and most of the royals who run the Middle East. 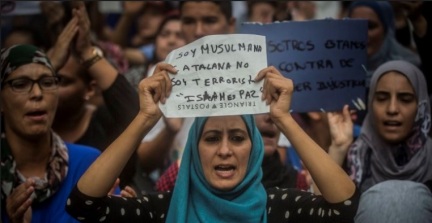 In the middle are the silent majority of Muslims who sort-of believe the dogma and sort-of observe the rituals, much as most people who were brought up Christian sing Christmas carols and eat hot cross buns, but are more interested in giving their children a good education, paying off the mortgage and going somewhere nice on holiday. This is the target. The silent majority. Daesh’s aim is to create hatred of them, causing them to feel alienated and eventually withdraw from the secular societies they have happily inhabited.

If all goes according to plan they will withdraw into the welcoming arms of the True Believers, who will take their children into their madrassas, veil their adolescent daughters, and teach their adolescent sons the take revenge on the societies that rejected them.

So the way to thwart them is to refuse to hate.

There is a terrible battle going on within Islam – or rather several terrible battles, very like the battles that raged in Christendom 500 years ago. They may take as long to be resolved. They may never be resolved. But if there is a way for the rest of us to hasten a happy outcome, it will involve engaging with and supporting the people whose values most closely resemble our own.