I just read an article by Clementine Ford headed ‘Why are so many men outraged by a Free The Nipple picnic?’  Two young women – Zoe Buckley Lennox and Amanda Haworth – organised a topless  picnic in a Brisbane Park, invited other women via Facebook, and got  big crowd.

The purpose was to promote the idea that women’s bodies exist for more than the sexual gratification of men, and the owners of nipples should be free to display them if they choose to, irrespective of gender. In the voice-over to a video clip (from which the picture below is a still) Jan Bowman points out that girls as young as 6 are told to cover their nipples, even though there is no visible difference between them and a 6-year-old boy’s nipples.  Thus little girls grow up believing that there is something indecent about their bodies. 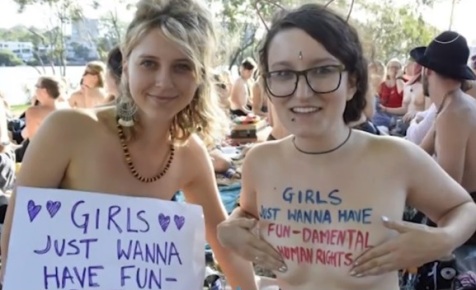 Apparently a lot of men were outraged, expressing ‘sexist aggression’ and ‘rampant misogyny’. I don’t understand this.  I don’t know any man who would vote against women exposing as much of their bodies as they wish to.

Please tell me… If you’re a man, do you object to seeing women’s nipples, or any other body parts that are generally covered for the sake of modesty?  If you’re a woman, do you want to have the freedom to expose more of your body than existing social norms allow?