I found this newspaper cutting tucked into the 1974 diary of my late uncle. I don’t know which newspaper’s personals page it came from (he lived in London) or which of the two advertisements he was interested in: probably the first. 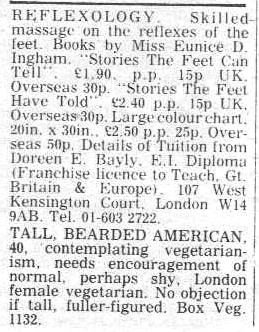 But I’m more interested in the second one. I’ve tried to conjure up a convincing back-story in my mind. Perhaps it’s in code.  ‘Vegetarianism’ may be a euphemism for a sexual practice that would have been frowned on in 1974, in which case ‘encouragement’, ‘normal’ and ‘shy’ could have had subtly nuanced meanings that only fellow-practitioners would have understood.

Or maybe ‘Bearded American’ was a spy’s under-cover name, and ‘tall’ meant that he had documents to hand over. ‘Shy’ meant “Be careful, you may be followed” and ‘fuller-figured’ meant “You’d better pay me more than last time.”

Can anyone throw light on this? Or come up with a better theory?  Best of all, were you or did you know this 40-year-old tall, bearded American?  You/he would be 80 or 81 now.