Thanks to long-term lobbying by Jamie Oliver (pictured below in celebratory mood) and others, the UK Government has announced a tiered tax on soft drinks containing more than 5% sugar.  The most popular fizzy drinks are more than 10% sugar. 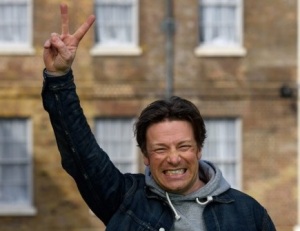 The tax will not start until 2018 and HMG has not told us what the tax rates will be, but according the CNN “Government documents suggest the tax rate could be equivalent to £0.18 ($0.25) and £0.24 ($0.34) per liter, depending on the sugar content.” This would add a pretty solid percentage to the retail price and yield revenue estimated at £520 million per year.

The policy is supported by an excellent report by a Government agency called Public Health England.

I’m in favour of letting people make their own decisions, good or bad, but I’m also in favour of pricing things to reflect the full cost of their production and consumption. Since excessive sugar consumption imposes enormous costs on society in the form of health care and lost productivity, I consider the Old Country’s sugar tax a partial correction of a market imperfection.

Actually, Mexico has already done it and the evidence suggests that it’s working as intended.  So well done, Mexico. But – unfairly perhaps – people are likely to take more notice of what the UK does, and perhaps emulate it.