Muhammad Ali died 9 days ago. The BBC World News TV channel classified this sad event as ‘breaking news’, cancelled normal programming, and broadcast hour upon hour of commentary and historical footage of Md Ali’s career until his funeral 3 days ago. Then we had live footage of a hearse driving slowly through Louisville. 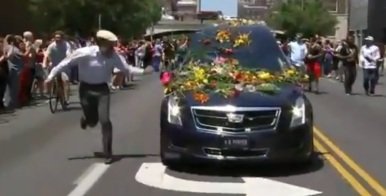 I mention the BBC because that’s my preferred news channel at the moment. But CNN and Euronews (my other sources of English language TV news here in Armenia) were no better.

Don’t misunderstand me. I remember listening to the fight between Cassius Clay (as he was then) and Henry Cooper (Our ‘Enery) when I should have been studying for my A Levels. I recognise that as sportsman, activist and iconoclast Md Ali was a towering figure – a true celebrity before that term became debased.

There’s good reason to review a great person’s life, achievements and influence in a couple of documentaries, which those most interested can choose to watch. But the extent to which the airwaves were given over to this one event was, to my mind, excessive and showed poor judgement on the part of the programmers.