People in rich and peaceful countries don’t have enough to worry about, so they look around for irritations and talk them up into Big Issues. This is happening now in Australia with male suicides.

Now, please don’t misunderstand me. I know there are people who kill themselves during fits if depression or in response to tragic events, from which they could have recovered to lead happy lives, and I wish they’d had second thoughts. But there are also people who rationally consider their prospects and their options and decide that they’d rather be somewhere else. They’re not enjoying the party so they want to leave. For those people, suicide is rational and even admirable. Their leaving the party means that the net sum of happiness in the world is increased.

But what makes me stroppy is that the people who are promoting this as a Big Issue in Australia speak as though suicide among Australian men has suddenly become a crisis that has to be moved up the political agenda. Notice my italics. The implication is that Australia is the suicide capital of the world and men are disproportionately affected.

Now consider the following facts, drawn from Wikipedia with a WHO citation and with age standardisation: 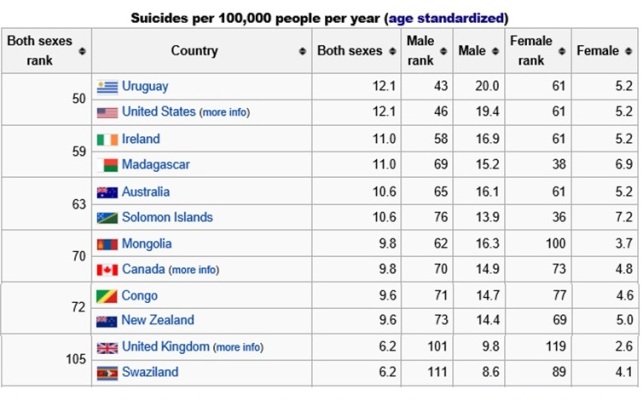 Where it says ‘more info’ you can click and see more if you go to the referenced Wikipedia page.

So how the hell did the UK manage to tie with Swaziland at No.105?! Perhaps most of the unhappy Poms have emigrated.