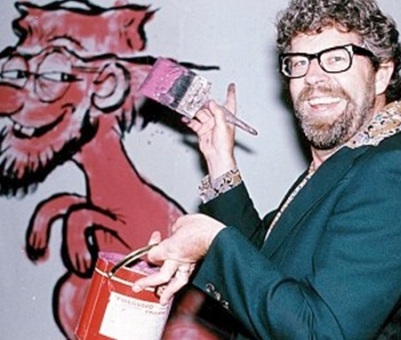 Like many other people, especially in Australia and the UK, I was shocked and unbelieving when allegations started being made about sexual abuse by Rolf Harris.  In 2014 he was found guilty in a British court and is now serving a 6-year prison sentence. Now I read that he is to be charged with seven more counts of indecent assault, allegedly committed between 1971 and 2004.

I don’t condone any kind of sexual activity that is not 100% consensual. Nor do I believe that serious crimes should be subject to a statute of limitations. But I would point out two things that I don’t think have been taken fully into account in the Court of Public Opinion:

As soon as Rolf was sentenced there was a sudden disappearance of his paintings from the walls of public buildings and of his recordings from the airwaves. To my mind this connotes either vindictiveness or cowardice or both.  I say ‘cowardice’ because many people, I think, feared seeming to be insufficiently outraged.  It reminds me – on a different scale – of show trials in the USSR and Nazi Germany, and the enthusiastic display of support for the verdicts by people who feared they might be next.