Australian universities apply high entry standards, especially for the most popular courses. Students sit their Higher School Certificate (HSC) exams and from their results are computed their Australian Tertiary Admission Scores (ATARs) on a scale 0-100.  To study medicine you need to score very close to 100.  If you want to study for a teaching degree, 60-70 is good enough.

At least, that’s how I thought it was. But there’s been a series of articles in the Sydney Morning Herald (SMH) revealing that most universities are admitting people with ATAR scores well below the published thresholds, of ‘cut-off scores’.  Among the most egregious is Western Sydney University.  Here is a partial graph showing the proportion of students who were admitted with sub-cut-off scores: 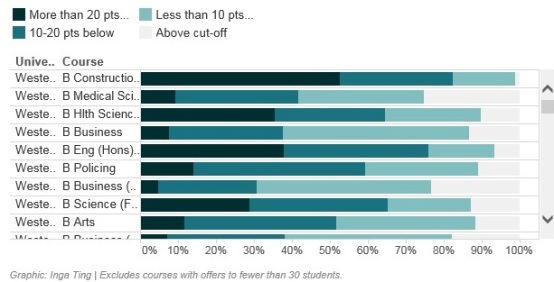 The next graph shows the average shortfall for the most affected courses at WSU:

The New South Wale Minister of Education, Adrian Piccoli, has criticised this laxity and called for tighter public funding to reduce the supply of university places. He has now been criticised by none other than Greg Craven, the Vice-Chancellor of the Australian Catholic University, for “shameful etitism.”

Now, in the bad old days people got to university because their parents could afford it. The sieve of academic scores, combined with student loans and subsidies, is a way of levelling the playing field.  It is also supposed to ensure that people who go into tertiary education are well-equipped to benefit from it, and then to use their skill and knowledge to the benefit of society at large.  Now it’s “elitist” to demand that tertiary students have the basic mental and educational wherewithal.